California’s three investor-owned utilities are among the nation’s top ten when it comes to energy efficiency programs, according to a report by the American Council for an Energy Efficient Economy on June 14.

The top two investor-owned utilities in the nation were Eversource and National Grid, which both operate in Massachusetts.

The two Massachusetts utilities also spent more of their total revenue on efficiency—at better than 10 percent—than their California counterparts, which spent around just 3 percent of their revenue on 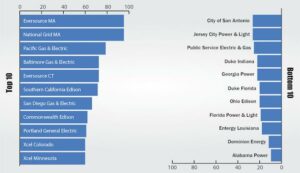