By Elizabeth McCarthyPublished On: November 15, 2021

The same day President Joe Biden signed into law the $1.2 billion infrastructure package that includes $7.5 billion for 500,000 electric vehicle stations across the country, the California Energy Commission approved a six-fold increase in its clean transportation investment plan. Eighty percent of the CEC’s $1.4 billion investment for the 2021-2023 fiscal years will go to electric vehicle charging and hydrogen refueling stations. Most of that will target stations that charge medium- and heavy-duty trucks to reduce toxic diesel pollution, particularly in overburdened communities.

Blacks and Latinos have twice the exposure of whites to polluting vehicles, with exposure even higher for those who are low income, Patrick Brecht, CEC Investment Plan Update Project Manager, told the commissioners at the agency’s Monday meeting.

“This is ZEV infrastructure day, not just for California but across the states,” Commissioner Patty Monahan said.

She noted California’s investment was the single largest of any state. More EV funding is expected to be approved Friday when the California Air Resources Board votes on its clean transportation funding plan. In addition, California should be able to tap into some of the federal EV grants in the infrastructure package.

The state budget surplus is providing $1.1 billion of the CEC funds. The remaining $238 million comes from the agency’s Clean Transportation Program. It will be distributed to projects through competitive solicitations and direct funding agreements.

“It is a banner year for clean transportation funding in California thanks to the budget surplus and wise decisions by the legislature,” said Bill Magavern, Coalition for Clean Air policy director.

He and other clean air and low-income advocates applauded the money the CEC is putting toward reducing large dirty diesel vehicles moving through poor communities.

Medium-sized and large trucks and buses are five percent of the vehicles on the roads in the state but produce half of the toxic air pollution.

The Clean Transportation Fund has directed $100 billion to 600 transportation pollution reduction projects and programs since 2009. Half of that has been aimed at reducing toxic pollution in disadvantaged communities. 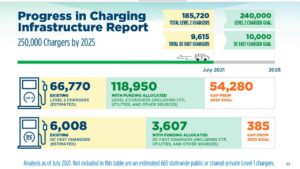 The new budget also includes $244 million for zero-emission vehicle manufacturing, $25 million for no and low carbon fuels,  and $15 million for workforce development.

In related news, the CEC also approved $5 million in grants for innovative charging projects for cars and large vehicles. The five projects, awarded between $949,000 to $1.45 million, range from half a dozen 120kW ultra-fast chargers with integrated battery packs, an adapter pilot to minimize grid impacts to smart grid charging of school buses.