By Herman TrabishPublished On: January 3, 2022

Record growth through the end of last September brought the combined installed wind, solar, and battery storage capacity in the United States to 186.7 GW, according to the just-released Q3 Clean Power Quarterly by America Clean Power. California had over 22 GW of that capacity.

But “it is important that the infrastructure bill’s investments are used wisely,” National Climate Advisor and former Environmental Protection Agency Administrator Gina McCarthy added. They must attract private sector smart grid investments and use the bill’s matching grant program and the new Department of Energy (DOE) authority “to close gaps in the transmission and distribution system.”

The infrastructure bill provides both $80 billion in energy transition seed money and authority to build transmission. But federal and state net zero emissions goals demand even more and the obstacles to building transmission may be even greater.

New generation is being built fast, but unlike traditional utility-scale generation built adjacent to load centers, large scale clean solar, wind and storage projects are often built in remote areas, like in deserts and mountainous areas far from the load center. And the pace of that building will speed up, the American Clean Power Association’s Q3 quarterly reported.

The cumulative 186.7 GW of clean power was made up of over 129.3 GW of wind, almost 54.2 GW of utility-scale solar, and almost 3.2 GW of battery storage. California’s estimated 22 GW of installed capacity included 14 GW of solar, 1.8 GW storage, and almost 6 GW of wind. As of Dec. 1, utility scale battery storage rose to nearly 2.2 GW, according to the California Independent System Operator.

Developers built 49 projects in 20 states in Q3. In addition, at the end of the quarter there were also 904 projects in the pipeline representing almost 109.6 GW of fossil free power, with 38.1 GW under construction and almost 71.5 GW in pre-construction development planning. Utility-scale solar was 54% of the pipeline, land-based wind projects 23%, offshore wind 13%, and battery storage 9%.

Though clean power prices have ticked up with supply chain issues, growth is expected to continue because the longer-term cost trend is “spectacularly down,” Bloomberg NEF Head of Americas Ethan Zindler said. But online clean power must double annually to meet federal and state decarbonization goals, requiring streamlined permitting and financing of transmission.

Over 100 GW of new renewables will be built annually, but public and private investment is not working together to meet flexibility and reliability needs, something new transmission could provide, said IHS Markit Vice President and Managing Director, Global Power and Renewables, Xizhou Zhou. 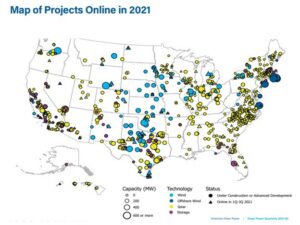 Improved long-term planning, streamlined permitting, better allocation of costs to beneficiaries, and faster interconnection can come with combined federal-state action that recognizes the importance of getting transmission built, Salerno said.

Beneficiaries of new transmission should pay

The costs of new transmission, now vital to delivering new clean power resources across regional jurisdictions, must be allocated to those who will benefit, French added. And the task force must also find ways to focus on effective long-term planning that anticipates transmission needs and resolves permitting and interconnection delays.

The value of major inter-regional transmission was never more evident than during the Texas February freeze, said Midcontinent Independent System Operator (MISO) Executive Director Derek Bandera. Lines built to bring SPP and MISO wind to the East instead brought available generation to them while Texas, which had little inter-regional interconnection, had power outages.

It was an enormous reliability reward for the long groundbreaking SPP-MISO collaboration over the last 20 years, Bandera said. Much more inter-regional transmission and the MISO-SPP solutions on cost allocation can be key to streamlined development.

California’s proposed Western regional system is another example of the need for planning, Armistead said. The West coordinates on momentary energy needs but does not do adequate joint planning to meet its growing capacity shortfall.

A key to removing development obstacles, including local objections, is recognizing that threats from climate change-driven extreme weather events have sharply increased transmission’s reliability and resilience values, the panel agreed.