By Herman TrabishPublished On: November 16, 2021

Customers increased reliance on home utility services has caused a rise in scammers preying on them and in increasingly nefarious ways, according to California’s investor-owned utilities and public utilities.

Pacific Gas & Electric and Southern California Edison customers were cheated out of more than $1 million recently. San Diego Gas & Electric customers lost half a million dollars to scammers since 2020.

The rising numbers are “just the tip of the iceberg” because so many scams go unreported, PG&E spokesperson Jason King told Current.

“During September and October, the number of attempted scams reported to PG&E increased by 65%,” King said. For July through September, there were 7,853 reports, and 468 customers were victimized, paying over $370,166 to scammers, he added. Customers “are being targeted by scammers impersonating utilities, typically online, in-person and by telephone.”

Scams have long been a concern, but Southern California Edison is receiving increased reports of attempted and successful scams, SCE spokesperson Ron Gales agreed. This year, “customers reported more than $590,000 in fraud, surpassing the $426,000 reported lost to scammers in all of last year, he said.

Because of COVID-19, more people are working, studying, or following social distancing guidance at home. Also, more customers are behind on their bills so they more readily comply without checking when scammers call threatening disconnection due to late payment.

Over the past two years, SDG&E, the smallest of California’s IOU majors, received 806 reports of scams from customers with estimated losses totaling about $513,100, spokesperson Helen Gao reported.

The utilities highlighted the problem as part of the sixth annual Utility Scam Awareness Day.

A consortium of over 145 U.S. and Canadian electric, water, and natural gas utilities formed Utilities United Against Scams (UUAS ) to raise awareness of how scammers work. The campaign’s effort claims to have taken nearly 9,500 toll-free utility scammer phone numbers “out of operation,” according to a PG&E release.

Scammers “have intensified their criminal activity with high-pressure tactics and increasing use of technology,” said Jared Lawrence, UUAS founder and Duke Energy Vice President of Metering Services and Customer Service Transformation. They have often targeted the most vulnerable, including senior citizens and low-income customers, and small business owners during busy hours, UUAS added.

But investor-owned utilities’ efforts to maximize shareholder returns “at the expense of public safety and bill affordability, should make everyday Utility Scam Day,” responded Mark Toney, Executive Director for ratepayer advocacy group The Utility Reform Network. Instead of making a “dog and pony show” of pointing a finger “at two-bit scammers,” utilities should be holding up a mirror to themselves.

Though not matching the controversial billions involved in IOU rate cases and ongoing policy decisions, the numbers involved in scams are becoming significant.

“Scams are typically related to difficult times and the pandemic has made times more difficult,” SDG&E’s Gao said. “People are also more dependent on home electricity and heating and more vulnerable to cutoff threats, especially when scammers can use new methods of online and phone payments.” 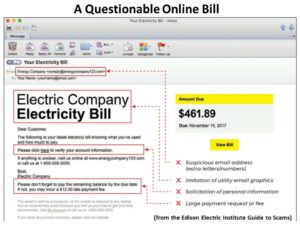 Scammers prefer prepaid debit cards like Green Dot or MoneyPak, cryptocurrencies like bitcoin, or third-party payment apps like Venmo or Zelle “because they are difficult if not impossible to trace,” both Gao and PG&E’s King said.

Scam reports to SCE customers for November and December 2020 “rose more than 40%” over those months in 2019, said spokesperson Ron Gales.

“Scammers are constantly changing their tactics and tricks, so awareness and reporting are more important than ever,” said PG&E VP for Residential Services and Digital Channels Chris Zenner said in a statement. “If an email, a visit to your home, or phone call doesn’t feel right, don’t fall for it. Delete it, shut the door or hang up.”

Because many of the online scams originate from other countries, “prosecution can be difficult,” PG&E’s King added.

The biggest indicator of a potential scam is a phone call or email aggressively threatening disconnection and demanding immediate payment for past due bills without allowing for verification. They are often accompanied by demands that the customer purchase and use a prepaid card to avoid service the shutoff.

Three variations were documented by SCE.

One caller, using an authentic-looking 800 number for the customer’s phone display, said an SCE “COVID-19 relief program” would cover half the overdue amount with immediate payment, SCE’s Gale said. An alternative claimed the offer was from a relief organization working with SCE. If either got money from the customer, another call followed demanding further payment, he added.

A second scammer mimicked SCE customer service precisely, including putting the customer on hold with music and apologizing for the delay, SCE reported. The customer was told a technician would arrive in 40 minutes to disconnect service without immediate payment by a prepaid card. The threatened disconnection was postponed by partial payment, but a second call demanding the balance followed.

A third scam required payment of an overdue bill via a mobile payment app to avoid a shutoff, SCE said. In this instance, the suspicious customer used another phone line to contact SCE and confirm the call was a scam but endured an estimated 10 follow-up calls from a phone number that did not answer calls investigating the scam.