CAISO Board Focuses on Near Term Needs and Long Term Ambitions

By Herman TrabishPublished On: September 27, 2021

The California grid operator is keeping close tabs on climate crisis-driven wildfires and outage uncertainties while looking down the road towards a regional power market.

Despite wildfires across CAISO’s region, power system conditions have been relatively stable since mid-July, but “extraordinary action” is still needed for procurement of emergency resources,  California Independent System Operator President and Chief Executive Officer Elliot Mainzer reported to the power system and market operator’s board Sept. 23.

“The prolonged drought, more extreme weather, wildfires, and diminished hydro have increased reliability risks,” Mainzer said. If needed this fall, CAISO will dispatch emergency generation to protect reliability, and mitigate costs for consumers in California and other Western states

CAISO also is putting greater urgency on transmission planning, Mainzer said. It cannot meet clean energy objectives and protect reliability without “the transmission capacity to send power where it is needed and displace older generating resources.”

New processes and tools enable greater situational awareness and system operator coordination against Western Interconnection fire threats. As a result, “we have not needed to shed load so far this summer, although we did come close during the weekend of July 9 due to extreme heat and the Bootleg Fire’s impact on imports,” according to Mainzer.

With EIM cumulative benefits now at $1.42 billion and six participants being added by 2023, regional leaders see a new opportunity. Moving from the estimated 5% of real-time power flows in the EIM to optimizing dispatch of all the resources in Western markets could save billions of dollars in meeting the high renewables and emissions reduction mandates across the West, stakeholders told Current.

An EDAM can drive market “evolution” by building on the EIM’s success to “optimize transmission connectivity and resource diversity across the widest geographical footprint possible,” Mainzer said. 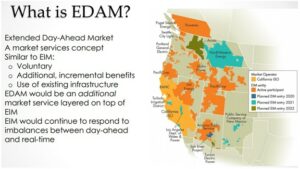 The EIM’s resource sufficiency evaluation, which assures EIM participants can deliver on their market commitments, was inadequate during “several intervals” of California’s August 2020 blackouts, Mainzer said. Phase 1 of an EIM stakeholder process is clarifying rules and practices to improve its accuracy and transparency. Phase 2 will address failures to deliver committed resources.

New initiatives for the CAISO interim market mechanisms, approved by federal regulators in June to allow more efficient energy transfers through its system, have advanced. At stake is crucial energy imported and exported through the CAISO system to protect reliability during extreme weather-driven demand spikes and supply shortages.

CAISO has, at some times of constrained supply, been forced to prioritize between exporting resources or using energy to serve California load. But discriminating in favor of native California load raises red flags for other Western Interconnection balancing authorities.

New market mechanisms for this summer were put in place in July to better protect Western Interconnection load serving entities and balancing authorities. The longer-term framework for summer 2022 and beyond must be resubmitted for final FERC approval by June 2022.

Phase 1 of CAISO’s External Load Forward Scheduling Rights Process, launched by the July workshop, can be in place by summer 2022, Mainzer told the Board. They include stakeholder proposals for studies to drive transmission upgrades and “a forward transmission reservation process” to make scheduling priorities more transparent and show all market participants what transmission is available, he said.