By Herman TrabishPublished On: December 13, 2021

On Dec. 3, following a forum and foundational workshop, CAISO responded to stakeholders’ calls for more detail and committed to creating working groups to resolve the thorny problem of potential market manipulation.

The first effort to create a day-ahead market power was launched before the pandemic but then halted.

Seeing the success of CAISO’s voluntary real-time Energy Imbalance Market power providers are working toward a much bigger and more challenging ambition. While the real-time market handles less than 10% of the West’s daily energy transactions, the proposed Extended Day-Ahead Market could handle over 90% of them.

A glaring absence in CAISO’s recent responses is how it will resolve the hard questions about governance in an Extended Day-Ahead Market, which dominated stakeholder concerns during an October forum.

The outline of the principles presented at the forum included those vital to a regional day-ahead market’s function, like clarity on generation and transmission commitments and compensation.

Recent governance reform that shares authority between CAISO and the EIM demonstrates California is ready to share EDAM governance with other states, said Southern California Edison President and CEO Kevin Payne during the forum. But designing a shared EDAM governance seen as equitable by both California and out of state entities will be a “real lift,” responded,  President Doug Cannon of NV Energy.

EDAM’s governance is “critical,” CAISO acknowledged. The principles “largely align” with the shared authority model and “is a good model to consider for EDAM,” it added.

Joining EDAM should be voluntary for power providers, but there should be “a minimum commitment period” and members’ entire load should be “optimized through EDAM,” the principles state.

EDAM also must include an accurate resource sufficiency evaluation, with consequences for “leaning.” That is when a participant uses others’ resource adequacy instead of providing its own, CAISO and Powerex agreed. The less than adequate EIM protections against leaning will be improved, according to the grid operator.

There are overlapping concerns on transmission commitments and tariffs, and accommodations will be needed because of the entities’ differences, Howe said.

EDAM dispatch should maximize Western transmission capacity, but pre-existing contracts and tariff agreements should be protected, forum presenters said. A balance is important because otherwise, one region’s curtailed renewables may go unused because transmission capacity under bi-lateral contracts is not used.

The CAISO three-bucket framework established in 2020 sets transmission compensation according to the level of its commitment and use, according to CAISO.

Bucket 1 is transmission contracted prior to any EDAM obligations. It will be optimized, and its owner compensated but not charged an EDAM usage fee.

Bucket 2 is transmission previously reserved for use. It could be scheduled and used by the party that reserved it, or provided to EDAM for optimization, according to CAISO. If optimized by EDAM, the owner would be compensated by a share of payments made to address congestion or used and compensated by EDAM in a way to be determined.

Bucket 3 is previously unsold transmission capacity. It would be made available to EDAM and its owner compensated at a to-be-agreed-on rate. If not used, it would be released back to its owner to be resold. 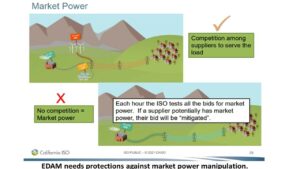 Progress on transmission is likely from the working groups, Howe said. But price setting is an area of debate in any market. CAISO said issues like scarcity pricing are too difficult for EDAM to settle immediately, he added.

Price certainty is the only way to have confidence in a market, stakeholders said. But resource prices vary by region, location, and time, and many EDAM stakeholders’ pricing practices also vary, which could make price setting “a big sticking point,” they warned.

A market “will set the optimal and fair and reasonable locational marginal price if there are adequate buyers or sellers and no collusion, Howe said. CAISO and other regional markets have rules, severe financial penalties, and monitors to protect against market power manipulation. But EDAM does not yet have those protections.

Entities could take advantage of rules or enforcement laxity to increase prices when generation or transmission is scarce, CAISO was told.

Issues like scarcity pricing and mitigations to market power manipulation will be part of the separate stakeholder process that will “be completed ahead of EDAM final design implementation,” CAISO responded.