By Herman TrabishPublished On: October 18, 2021

The California-led real-time Energy Imbalance Market has delivered significant savings to Western power providers, but other regions’ market ambitions are threatening the plan to expand it to a day-head market in three years.

Western states’ challenges from rising penetrations of variable renewables and climate-driven extreme weather events “are better resolved collaboratively than by balkanization,” he added.

Recent governance reform that shares authority between the CAISO and EIM members helped initiate a timely relaunch of the COVID-delayed EDAM stakeholder process, many said. But other stakeholders have serious reservations because of concerns about CAISO’s willingness to similarly share control in a regional day-ahead market.

EDAM governance sharing is solvable, Southern California Edison President and CEO Kevin Payne told the forum. Doing it will be “a key test” for CAISO’s stakeholder process, but California “is ready to sit down with other states.”

But the “real lift lays ahead,” cautioned President Doug Cannon of NV Energy, one of the Western Market Exploratory Group utilities looking for a market that provides participants a “voice in governance.” 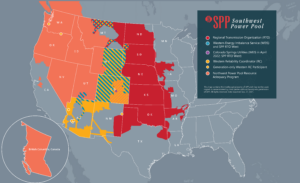 The potential to resolve tough topics, however, was demonstrated in a forum presentation of design principles developed and agreed to by EDAM stakeholders, showing there is “more alignment than misalignment” between potential EDAM participants, CAISO SVP and COO Mark Rothleder said.

Joining EDAM should be voluntary for power providers, but there should be “a minimum commitment period” and members’ entire load should be “optimized through EDAM,” the principles state.

The objective is to make each participant’s commitment to EDAM certain but give them an off-ramp if they choose to leave the market without compromising the reliability of other market participants, said representatives of BANC and PG&E.

EDAM dispatch should also maximize the West’s transmission capacity, but pre-existing contracts and tariff agreements should be protected, Idaho Power and SCE representatives insisted. Currently, one region’s curtailed renewables that could meet another’s needs may go unused because transmission capacity under bi-lateral contracts is not being used.

Individual jurisdictions will still have primary responsibility for their own resource adequacy, but EDAM transfer commitments “must be firm” in order to give participants confidence in the market, Salt River Project and SCE forum presenters said.

How to set market prices remains to be settled but will be key to market optimization, Seattle City Light and SDG&E forum speakers said. Price settlement certainty is the only way to have confidence in the benefit of the marketplace, but prices of resources may vary by region, location, and time. Thus, it could “be a big sticking point” or “derail the process,” they warned.

The Expanded Day-Ahead Market may not be Western states’ first choice. SPP’s Energy Imbalance Service (WEIS) is now competing with the CAISO-run EIM, and it is developing Markets+, which “would centralize day-ahead and real-time unit commitment and dispatch,” SPP, which serves 17 Midwest states from Montana to Texas, said. It “provides a voluntary, incremental opportunity” for utilities testing regional engagement.

Forum participants’ reactions to the EDAM stakeholder process were mixed.

EDAM “is what is in reach,” said Commissioner Letha Tawney of the Oregon Public Utilities Commission.

But EDAM “can’t be the end goal” because the West needs a full-blown Regional Transmission organization, responded Northwest and Intermountain Power Producers Coalition Executive Director Spencer Gray. It will leave money “on the table every day in transmission and energy” because of lacking centralized transmission operations and planning, and fully optimized dispatch of the wholesale market, which the SPP and NWPP proposals are striving to create.

California is gradually refining the EDAM governance framework and learning how to balance participants’ authority, Assemblyman Chris Holden said. To expand on the EIM success, “it is important to keep talking because that is how we get to the best structure for power-sharing.”

The EDAM stakeholder initiative will officially begin Nov. 12 with a foundational workshop. It will develop governance reform and policy design working groups that will report to the CAISO Board and EIM Governing Body in the fourth quarter of 2022.

Since 2014, the EIM has reaped $1.42 billion in cumulative benefits and will have secured 22 participants with 84% of the West’s electricity demand by 2023. Significantly more customer savings could be achieved by moving from the less than 10% of real-time power flows in the EIM to optimized dispatch across the West in an extended day ahead market.