By Elizabeth McCarthyPublished On: November 16, 2021

The California Energy Commission has okayed a $750 million budget to support clean energy research and development—from projects that are under development at labs, to those that are near commercialization. The five-year plan is in addition to approving more than a billion dollars to extend charging for trucks, buses and cars on Monday.

Funding of about $150 million per year through 2025 will go to offshore floating wind turbines, including standardizing the integration of the power into the grid; distributed energy, including vehicle-to-grid advancements; energy efficiency; zero-emission buildings; long-duration storage and alternatives to lithium-ion batteries. Funding also is directed at clean energy entrepreneurs who address climate resiliency and are developing innovative technologies. The extraction of lithium from the geothermal brine at the Salton Sea will also get some funds.

All of the money will come through the Electric Program Investment Charge, which is folded into investor-owned utility ratepayers’ bills.

California hopes to develop up to 4.6 GW of offshore wind off its central and northern coast. Because the seafloor there is deep, floating turbines are presumed to be the best technology. EPIC funds will prioritize technologies that lower the costs of components, installation, and grid interconnection. Money also will be directed to reducing any harm caused by either turbines or cables to marine life.

At the end of last week, the Bureau of Ocean Energy Management designated Morro Bay as an official offshore wind area. The area begins about 20 miles offshore and comprises some 376 square miles. BOEM has been working with California agencies and the military on siting up to 3 GW at Morro Bay. It is now preparing an environmental assessment.

In late July, the agency designated the Humboldt Bay an official wind energy development region, covering 141 square miles, 25 miles from the coast. An environmental assessment is currently underway there as well, on plans to develop up to 1.6 GW.

“Offshore wind presents a significant opportunity for California and our nation as we transition to clean, renewable energy,” said BOEM Director Amanda Lefton. 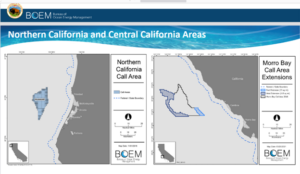 The federal agency expects to auction leases for the two areas a bit later than initially anticipated, next fall instead of the summer, spokesperson John Romero told Current.

The Bureau is coordinating its offshore wind efforts with the Energy Commission, other state agencies, the departments of Defense and Interior, and tribal governments. Its authority is based on the Outer Continental Shelf Lands Act and Energy Policy Act of 2005.

Electric vehicles that feed back charge to the grid are also slated for EPIC funding. The expected surge in EVs is projected to increase energy use by 21% on a typical day, said Commissioner Patty Monahan. “But it is a flexible load that we can capitalize on,” she said, highlighting vehicle-to-grid opportunities.

The CEC has directed $846 million in funds through EPIC since it began, to 385 projects that have gone on to attract $3.5 billion in private capital, creating hundreds of jobs and $18 billion in savings, according to Commission staff.