“The PCIA is a material element of CCA’s total generation rates,” Vaughan emphasized.

The PCIA is strongly influenced by changes in market prices, such as resource adequacy–which can move significantly over the course of a year–and by the accuracy of annual market price forecasts. A forecast mismatch can result in substantial IOU balancing account balances that must then be amortized in the following year’s rates. These two dynamics led to a spike in the PCIAs filed by the three IOUs for 2021, and in calculations for 2022, in which there was a material drop. CalCCA modeling indicates CCAs will “need to wrestle with the effects of PCIA volatility for years to come,” Vaughan said.

That motivated the community entities to sponsor SB 612 by Sen. Anthony Portantino (D- La Cañada Flintridge). It sailed through the Senate but stalled in the Assembly Utilities & Energy Committee. Vaughan stressed the bill aimed to ensure all customers get the benefits associated with the resources for which they paid.

The principle embedded in SB 612 may yet bear fruit, Vaughan said, as the CPUC works to implement the RPS voluntary allocation program in 2022, “as well as the commission’s promise to consider how to ensure fair access to the GHG-free value of PCIA resources.”

Since Cal-CCA launched five years ago, aggregators’ load has grown more than 10-fold, to an estimated 60,000 GWh in 2022. The state’s 24 aggregators now serve 11 million customers and have signed 162 long-term power purchase agreements for nearly 10,000 MW of new clean energy resources, including 3,000 MW in 2021.  A large percent, about 2,000 MW, were solar deals co-located with battery storage. 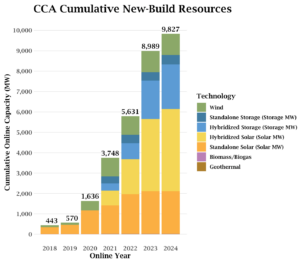 All energy providers in the West struggle with volatility brought on by drought, wildfires, scarcity of reliable resources, and concerns over transmission capacity, project permitting and supply chain issues. And like other California businesses, CCAs that launched during the pandemic struggled.

Last May, Western Community Energy declared bankruptcy citing cash flow pressure due to high power costs, customer nonpayment due to the pandemic, and a shortage of resource adequacy. Nearly half WCE’s customers were classified as low income and while the state provided some utility bill relief, customers and energy suppliers won’t see those funds paid out until 2022, and then only 45% of the balance will be extinguished, Vaughan said.

CalCCA will be working this year to introduce a set of best practices for CCA operations. “Our aim is to provide greater information to the public, our partners and regulators about the general health of CCAs,” she said.

There are three elements:

Vaughan pointed to CCAs’ progress in managing their financial affairs, including a growing list of CCAs with one or more credit ratings. To date that includes Marin Clean Energy, Peninsula Clean Energy, Central Coast Community Energy, CleanPowerSF, and Silicon Valley Clean Energy, with more on the way.

Another is the formation last February of the California Community Choice Financing Authority, a joint power authority composed of four CCAs. “It is expected to help member agencies save up to 10% or more on power purchase agreements,” reducing costs for ratepayers and increasing funds for local programs.

Continued CCA growth is altering the investor-owned utilities’ role in the retail market. It “may be the right time to shift central procurement responsibilities to a competitively neutral entity” that could coordinate reliability planning, be a provider of last resort, and a home for portfolio management for any IOUs that elects to exit retail sales, Vaughan said. This would free up resources to focus on mitigating threats to the grid and delivering safe, reliable electricity to customers.