By Herman TrabishPublished On: December 14, 2021

A firestorm of controversy followed the just-released proposed decision from the California Public Utilities Commission that would make big revisions to the compensation paid to rooftop solar owners under Net Energy Metering.

The PD’s net billing plan separates import and export charges, phases out the existing NEM plan while protecting the ongoing emergence of a solar-storage market, and provides a 10-year payback to protect the solar industry, Hymes ruling said. It specifically does the following:

A commission fact sheet showed that NEM payments have enabled an estimated 10 GW of rooftop solar that now provides up to 25% of the state’s midday electricity. But California’s “needs have shifted” and more than the current 10% of customers with solar-storage systems is necessary to support system reliability and reduce peak demand when the sun is setting. 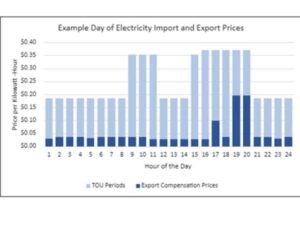 The new NEM shows the current NEM does not have price signals or incentives rewarding customers for adding storage, but costs ratepayers over $3 billion, the commission said. It also fulfills AB 327’s requirement to address evidence that solar owners’ reduced bills allow them to pay no more than 18% of what it costs to serve them, it added.

The PD’s “focus on low-income customers,” and its effort to reduce “the financial burden on non-solar customers,” are welcome, added Ron Gales, spokesperson for Southern California Edison. SCE has an estimated 10% solar customer penetration.

But for Sunrun, the proposed NEM overhaul “represents California politics at its worst.” It would “decimate the market for solar” and “discourage solar and batteries customers,” according to Sunrun co-Founder and co-Chair Edward Fenster, one of the top U.S. solar and battery services providers.

The “solar-customer fixed fees of on average $700 per year” violate 1978’s Public Utility Regulatory Policies Act and will “cost tens of thousands of jobs,” he added.

PD is full of complexity

“The proposal includes a raft of complex changes which, if approved, would put rooftop solar far out of reach for millions of Californians,” said Susannah Churchill, Vote Solar’s Western Senior Regional Director. The reduced compensation and “discriminatory” solar-only fees “drastically” reduce savings for customers and the system and “move us backward on clean energy.”

“The solar industry will tell you the ‘sky is falling,’” but continued drops in solar and battery costs will sustain it, responded Kathy Fairbanks, spokesperson for consumer coalition Affordable Clean Energy for All.

The central problem with the proposed decision is that to produce the significant benefits it seeks, “the TOU rate time periods should be adjusted to better match customer usage and the daytime rates should be lower,” said Regulatory Assistance Project (RAP) Associate Mark LeBel.

The commission’s calculations and data are unclear, but if the TOU rates are effective, the Grid Participation Charge and Market Transition Credit could potentially be workable, “though there are other options I would consider first,” LeBel added.

Some solar advocates said the Equity Fund was a ruse to make an objectionable PD look compassionate, but LeBel and other rate analysts said it and rebates for adding storage are reasonable steps.

Almost everywhere in the U.S., retail rate NEM “is a reasonable solution,” but California utilities have “fewer and fewer kWh” to pay for infrastructure through variable rates and must use fixed charges, he said. “That will push customers to disconnect from the grid, which happened in Hawaii, and encourages using solar-storage systems in ways that will not support the power system.”