By Elizabeth McCarthyPublished On: October 6, 2021 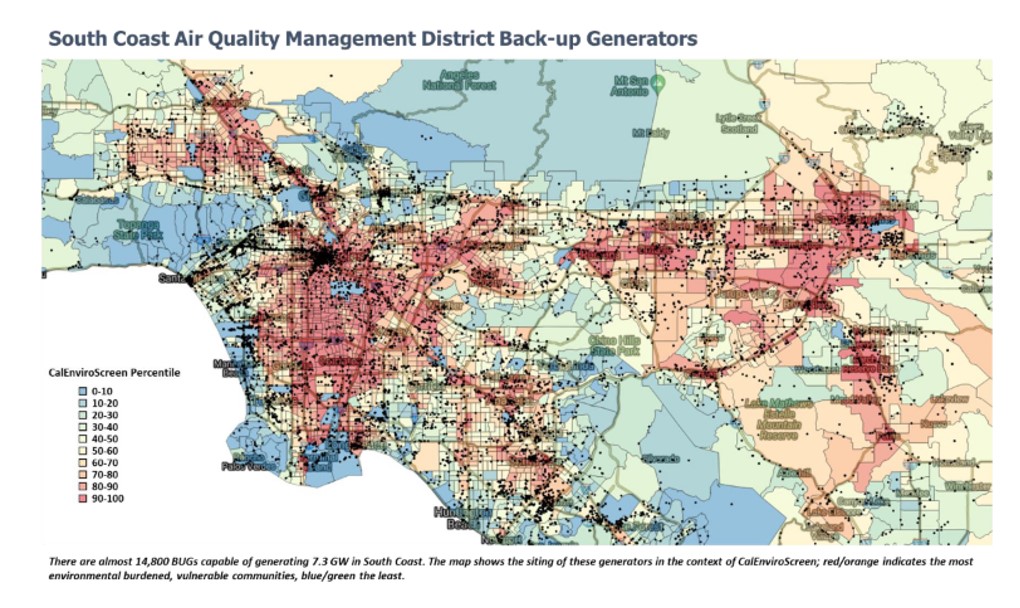 Businesses have installed backup generators across California at such a clip that they now amount to 15% of the total electrical capacity, with 90% diesel fueled, undermining California’s greenhouse gas reduction targets and harming public health. That is according to new research from the consulting group M.Cubed.

Over the last year, Southern California saw a 34% increase in backup systems, the group said. The Bay Area experienced a 22% increase, looking at just shy of three years of data.  The cumulative total in the two regions has soared to 12.2 gigawatts, or 87,223 megawatt hours a year, in response to preventative safety shutoffs by utilities and wildfires.

The largest installers are data centers, government agencies, hospitals and healthcare entities. These diesel-powered units often are located near workplaces, homes and schools, with many placed in struggling, polluted communities.

The South Coast Air Quality Management District had 12,104 back-up generators totaling 2,697 MW last year. That number rose to 14,785 backup systems, with 7,360 MW by May of this year. At the end of 2018, there were 6,497 back-up generators with 3,810 MW in the Bay Area Air Quality Management District. That number grew this year to 8,722 generators, with 4,837 MW of capacity, according to M.Cubed.In the Bay Area, 17% of the “generators are located in communities highly vulnerable to pollution” and far more in the Southland, up to 47%, the report found.

Emissions from backup generators harm communities, regional air quality and the climate, said Jack Broadbent, executive officer of the Bay Area Air Quality Management District. He noted communities overburdened by air pollution suffer the most, and that the district was pursuing regulations to curb pollution from these generators.

The actual statewide total is likely far worse, Moss told Current. That’s because permit information for generators is held separately at the state’s 35 air districts, and the report only covers the two largest ones. Total new diesel generation is probably double that of the South Coast and Bay Area, according to Moss. These permitted generators do not include the many residential backup generators across the state.

The consultants used public record requests to the two air districts to obtain the data earlier this year. District responses were incomplete because backup generators report their usage data only when their permits are renewed on a multiyear basis, and for other reasons, they said. “Altogether, 1,843 of the generators – 21 percent of the portfolio – last reported usage to BAAQMD in 2018 or earlier, despite being permitted for current operations.” M.Cubed’s research also found that a small subset of generators reported annual operational hours that exceeded their permit limits. Another 156 assets included “likely errors in reported usage hours or calculated emissions per hour for CO2,PM, organics, and NOx,” making it impossible to tally their emissions.