By Elizabeth McCarthyPublished On: October 14, 2021

The most recent batch of California Energy Commission clean energy grants is out and includes $13 million for research that leads to the installation of two public, heavy-duty charging stations for electric drayage trucks in the smoggy South Coast. The major grant goes to the Electric Power Research Institute together with the alternative transportation non-profit CalStart.

The Commission also approved on a 4-0 vote $9 million in grants to increase the electrification of transit and school buses. Of that, $6 million goes to the City of Los Angeles for a microgrid composed of a 1.5 MW solar array plus a 4.5 MWh battery to fuel 1.5 MW bus chargers.

The $13 million grant to EPRI and CalStart seeks to lower barriers for large battery-electric trucks. One main hurdle up until now has been the lack of public high-power chargers for electric trucks in congested regions. Another is the lack of a place in California to coordinate research and test short-haul truck charging ports, according to the CEC.

There are 23,000 heavy-duty haulers in California, 18,000 of them near the Los Angeles-Long Beach ports complex, which is surrounded by disadvantaged communities, Esther Odufuwa, Energy Commission transportation specialist, noted. Every year, large trucks produce almost 10% of the state’s greenhouse gases, emit 3,700 tons of nitrogen oxides, which is 26% of the state total, plus 20 tons of particulate matter, according to the CEC. In the South Coast air basin, drayage trucks “are the primary contributor of port-related emissions,” producing 40% of total port-related greenhouse gas emissions and more than 20% of NOx. The pollution can lead to heart attacks, chronic obstructive pulmonary disease, asthma, cancer and premature births. 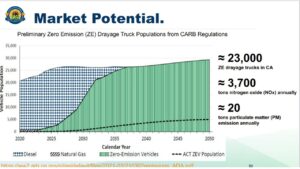 One of the goals of the research hub is to standardize electric truck ports “to avoid the situation” that has happened with car chargers, Monahan said. Different automakers use incompatible chargers.

The hub is required to create two high-power truck sites with 1 MW-plus charging equipment along major freight routes in the jurisdiction of the South Coast Air Quality Management District.

The agreement with the CEC also requires the project to:

The City of Los Angeles was awarded $6 million for a solar-battery microgrid to charge buses. The project goal is advance zero-emission buses while “minimizing electric grid impact, flattening peak electrical demands, allowing bus recharging” onsite at the lowest cost, while providing resilience, according to the CEC.

The other award recipient is Momentum Dynamics. It won a $1.7 million grant to deploy 300 kW wireless vehicle chargers at seven locations in Solano County, including for 13 long-haul buses.

The project seeks to fill charging gaps for buses that travel up to 100 miles, according to Bob Kacergis, Momentum COO. The technology will be shared with other transit agencies, he said.