Energy Agency May Turn Automation of Grid-Connected Devices into Reality

By Herman TrabishPublished On: January 11, 2022

The California Energy Commission took the key first step toward a customer-led power sector that would help balance the grid during times of stress with the launch of its Load Management Standards rulemaking in late December.

These long-overdue load management standards will help build a cloud-based “platform” in which utilities upload “a publicly accessible statewide rate database” that can be used by large and small energy users, he said.

With advanced meters, communications, and automation technologies, customers and third-party aggregators gain the ability to take advantage of rates to optimize electricity usage and minimize economic and environmental impacts, according to the final CEC Staff Report on the rulemaking. 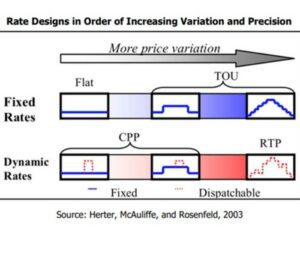 Currently, there are a number of companies that aggregate customers’ two-way power flows and sell it to utilities and the grid operator, but the market potential is far larger.

The CEC initiative could be “a gamechanger” by leading to “prices to devices” solutions that allow complex rates to be applied by customer devices “in almost real-time,” said Brattle Group Principal and rate design authority Sanem Sergici.

Today’s load management focused on peak load reductions is through utility-led programs that lack “granular time and location-dependent signals,” said the Staff Report. Making newly enabled granular time and location-specific price signals accessible to smart device and appliance providers will allow them to be programmed for automated responses to price and system factors.

The total statewide benefits shared by utilities and automation service providers are estimated to be around $267 million through 2040. Benefits include reduced peak usage, reduced residential battery charging during peaks periods and reduced greenhouse gas emissions.

Two less ambitious alternative changes to today’s load management practices have comparable or greater costs but benefits of up to between $193 million to $209.5 million in the same period, Staff estimated.

The total net present value cost of the proposed amendments, primarily to large businesses to implement new technologies is estimated at roughly $24.3 million from 2025 to 2040, Staff found.

High flexibility potential from thermostats, water heaters, pool pumps, and EV charging could be incorporated in the first uses of the load management platform, according to McAllister. Other connected loads like large appliances and home gateways for broadband would follow.

The CEC’s MIDAS platform will be a database of time-varying rates uploaded and maintained by Pacific Gas & Electric, San Diego Gas and Electric, Southern California Edison, Los Angeles Department of Water and Power, and the Sacramento Municipal Utilities District, California’s five biggest electric utility territories, Commissioner McAllister said. They and the community choice aggregators in their territories represent over 95% of the state’s customers.

Each rate will have a Rate Identification Number (RIN) in a standard machine-readable format and be publicly accessible through an application programming interface (API), according to the MIDAS website. The platform, which will include interoperability via wi-fi or radio signals, will also have information on California’s emergency conservation Flex Alerts and greenhouse gas emission markets. 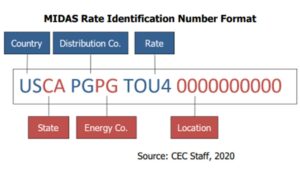 Platforms have been proposed in other states, notably New York. But, according to McAllister, “We are breaking new ground that could benefit others by enabling automated responses to price signals.”

With customers’ consent, utilities and third parties can use MIDAS to optimize supply and demand with flexible demand technologies like water heaters, smart thermostats, and EV chargers.

Initial objectives are implementing “at least hourly” rates that “reflect locational marginal costs,” and upload and maintain that information in MIDAS.

The next objective is a single standardized statewide method for automation service providers like Genability to access eligible rate programs and to integrate MIDAS information into customer education and outreach programs, Staff reported.

The CEC initiative is supported by DER, microgrid, and smart device providers, large investor-owned utilities, including SCE and PG&E, and SMUD.

CEC load management standard efforts are a “foundation” for use of dynamic pricing and automated demand flexibility but changes should be gradual, both SCE and PG&E agreed.

Load management that supports advanced time-varying rates is “crucial” but clarity is needed to ensure customers do not misunderstand the MIDAS data, SMUD Government Affairs Representative Martha Helak added. More specificity also is needed about whether and when historic or future rate information will be required from utilities, she said.

The proposal can lead to new rate structures, but the CEC should clarify that its “recommendations” are not “mandated” and do not impede community choice associations’ ratemaking authority, the California Community Choice Association Director of Regulatory Affairs Eric Little wrote.

While supporting MIDAS, Enel X North America, the world’s leading provider of load management services, suggested more detailed coding. The CEC also should consider including rates for exported energy, like Net Energy Metering, as well as “non-price” information like data from the state’s CPUC Avoided Cost Calculator, and a proof-of-concept demonstration ahead of a statewide implementation.

The implementation of MIDAS will more accurately compensate electricity and third-party aggregators for optimizing flexibility, which will make flexibility “more scalable, reliable, and cost effective,” they added.

The CEC public hearing on adopting the new protocols for load management standards is scheduled for February 8.