By Herman TrabishPublished On: December 6, 2021

It is feasible to deliver cost-competitive renewable hydrogen to the LA basin and build a mass market, but only with a rigorous set of strategies and investor buy-in, HyDeal’s phase one multisector planning group concluded. To drive the current high costs of green hydrogen down, HyDeal needs to become a multi-sector, high-volume supply chain/off-taker ecosystem comparable to gasoline’s refineries, pipelines, and fueling stations, Green Hydrogen Coalition President and Founder Janice Lin said at a Dec. 1 coalition webinar.

There is $9.5 billion “clean hydrogen” spending in the new U.S. infrastructure law, including $8 billion for “Clean Hydrogen Hubs” like HyDeal LA, Department of Energy’s Hydrogen and Fuel Cell Technologies Office Director Sunita Satyapal said during the webinar. In addition, DOE Earthshot investments are projected to help reduce the costs of this renewably-generated fuel, potentially bringing its average market price from today’s over $50/MWh to $20/MWh in 2030, she added.

DOE’s Hydrogen Earthshot funding proposes to bring the current per kilogram cost of green hydrogen of about $15 to $1/kg by 2030. That would replicate the success of the DOE Sunshot, which brought the cost of utility-scale solar from $0.15/kWh or more to below $0.03/kWh in the last decade, Satyapal said.

In addition, LADWP committed to converting the Intermountain Power Plant in Utah and three in-basin power plants to green hydrogen over the next 15 years to advance the market.

Between 2030 and 2035, a $27 billion investment would be needed, according to HyDeal’s planning group. That would build 26 GW of solar and 20 GW of electrolyzers at IPP and other Southwestern sites to fuel renewable hydrogen generated electricity via existing and new transmission and liquid fuel via thousands of kilometers of new pipelines to meet the LA hub’s 1 million to 3 million metric tons of demand.

From 2025 to 2030, HyDeal would accelerate upstream production outside LA and introduce higher percentages of pipeline blends, proponents say.

Ultimately, dedicated pipelines will be needed to transport green hydrogen because they carry eight times the energy of transmission lines and will be needed to deliver liquid fuels to the LA basin for applications beyond power generation, HyDeal reported. 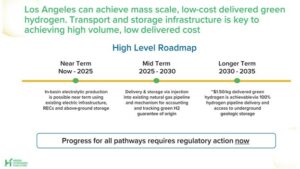 Some environmental groups, however, are concerned that this strategy would extend California’s reliance on natural gas.

Those new delivery pathways, the successful use of storage at Intermountain Power in Utah, and new in-basin storage for the delivered product are essential for reaching the under $2/kg delivered price, HyDeal’s study said. But it also offers the cost-effective long-duration energy storage which batteries cannot cost-effectively provide, and which LA and the state need to meet their zero-emission mandate.

The HyDeal hub’s viability also assumes lower electrolyzer costs because that cost curve is following a similar trajectory to solar and wind, BloombergNEF Heating and Hydrogen Analyst Matthew Bravante told the webinar participants. Electrolyzer costs are falling 12% to 24% with “every doubling in their cumulative installed capacity” and could “become very cheap” in the long term.

Renewable hydrogen is likely to be cost competitive by 2030 if installed capacity continues to grow rapidly enough to produce a 50% price drop, Dominion’s Hegewald agreed.

With the needed regulatory support, massive IPP storage, adequate pipeline infrastructure, and market success against batteries, the Earthshot/HyDeal vision can be achieved, the phase one study showed. That could drive significant private sector investment and economic growth in LA and turn the Southwest into “a Saudi Arabia for clean fuels,” Lin said.

HyDeal LA is the first of several emerging renewable hydrogen commercialization initiatives across the country. Initiated in 2020, its “hub” would begin by linking the LA Department of Water and Power IPP and renewable hydrogen production and storage facility to the LADWP’s clean energy demand, GHC’s Lin told Current.

IPP will be North America’s biggest renewable hydrogen project. Its converted coal plant will eventually be fueled by renewable hydrogen produced onsite with LADWP utility-scale solar and electrolyzers to generate electricity sent by existing transmission to help meet LA’s 100% renewables goal. Excess solar will be used to produce renewable hydrogen that can be stored in massive salt caverns near the IPP site.

In the near term, HyDeal intends to focus on the LA ports’ severe air pollution. Producers are beginning pilot programs to deliver onsite-electrolyzed or trucked-in renewable hydrogen for early adopters of zero-emission heavy-duty trucks, for off-loading maritime vessels, and for electric cargo handling equipment, they told the GHC webinar audience.

The HyDeal phase one planning group, made up of businesses, potential off-takers, investors, and environmental groups, described three stages to reaching cost-competitive delivery of renewable hydrogen in the LA basin at scale.

Electrolysis powered by renewables offers the most scalable production, but through 2025 renewable hydrogen made with organic waste can “kickstart” the hub, especially at LA’s ports, Lin said. Revenue streams from liquid green hydrogen delivered by rail and tanker truck to industrial and heavy transport off-takers would grow a market and attract investors in midstream transmission and pipeline infrastructure.

But HyDeal’s assumption that “green hydrogen is the key to displacing gas and diesel use” is challenged by many who see battery technology as a serious competitor.

Lithium-ion batteries’ falling costs and higher energy densities make them “the future of medium- and heavy-duty ground transport,” Alliance for Transportation Electrification Executive Director Phil Jones, a former Washington utilities commissioner, recently told this reporter. Renewable hydrogen “is also making progress, but it will not work as well” in those applications.

HyDeal assumed no financial incentives but could require federal or state regulators to order natural gas utilities to move to a blend of 5% renewable hydrogen in all deliveries, Lin said. It would not harm existing pipelines. A 5% reduction in California’s natural gas use and emissions and the potential economic benefits from kickstarting this sector make it a practical step for California regulators, she added.