By Elizabeth McCarthyPublished On: September 14, 2021

Adam Browning, executive director of Vote Solar for the last 15 years, is leaving his post at the end of this month. When he began working on rooftop solar at the turn of this century, it was the only solar game in town. It also was a very pricey one, at more than $12 per watt, with roughly 26 megawatts connected to the grid in California and 164 MW across the entire United States. Since then, the price has plummeted to about $4 per watt for distributed rooftop solar in California with 11 gigawatts online today, according to Bernadette del Chiaro, California Solar + Storage Association executive director. There is another 15 GW of utility scale solar in the state.

Back in 2000, Browning was working at the U.S. Environmental Protection Agency in enforcement when his interest in solar began. His good friend David Hochschild, now California Energy Commission chair, had recently installed photovoltaic panels on top of his home and saw his meter run backwards. The two began brainstorming on how to lower the cost of the solar arrays and bring the technology into the mainstream. They came up with the idea of a ballot measure for San Francisco that would fund installations of solar arrays on city properties. Hochschild at that time worked for then Mayor Willie Brown. Supervisors Gavin Newsom and Mark Leno, later a state senator, embraced the idea.

Browning and Hochschild worked with other environmental groups and teams of volunteers on what became Prop B. It sought a $100 million bond to fund PV installations in the city. In Nov. 2001, 73% of San Francisco voters approved the measure that made way for the most city solar installations in the U.S. at the time.

“Part of the solution”

Before the Prop B initiative, Browning had not been involved in political campaigning. The private utilities were not advancing solar installations and he discovered during the campaign that “people wanted to be part of the solution” to climate change.

Interestingly enough, also on the ballot at that time was a measure to take over Pacific Gas & Electric and replace it with a municipal utility. That effort failed.

After the success of Prop B, calls from around the world came pouring in, Browning said. The next year, he and Hochschild founded Vote Solar after landing $50,000 in startup funding from the Energy Foundation. Their goal was to replicate what they helped achieve in San Francisco: getting legislation enacted to enable the growth of rooftop solar.

“Through his prodigious fundraising skills, excellent sense of humor, and strong wit, Adam has built a national team of regulatory experts and online communications professionals to push for the adoption of solar energy throughout the country,” California Solar + Storage’s del Chiaro said. Getting solar laws and programs introduced and passed “is a massive effort that requires people and organizations focused and experienced in the legislative process.”

Environment California, Vote Solar and other environmental groups pushed for legislation that would subsidize installations of rooftop solar in California to lower costs. Early efforts met resistance. SB 1 by Sen. Kevin Murray sought to add 3,000 MW of solar over a decade by providing incentives that diminished over time. It failed to pass two years in a row. The California Solar Initiative was finally approved after being propelled by then-president of the Public Utility Commission Mike Peevey and Gov. Arnold Schwarzenegger. It included the Million Solar Roofs program that provided rebates from ratepayer dollars to help fund 1,750 MW of rooftop solar installations between 2007 and 2017. 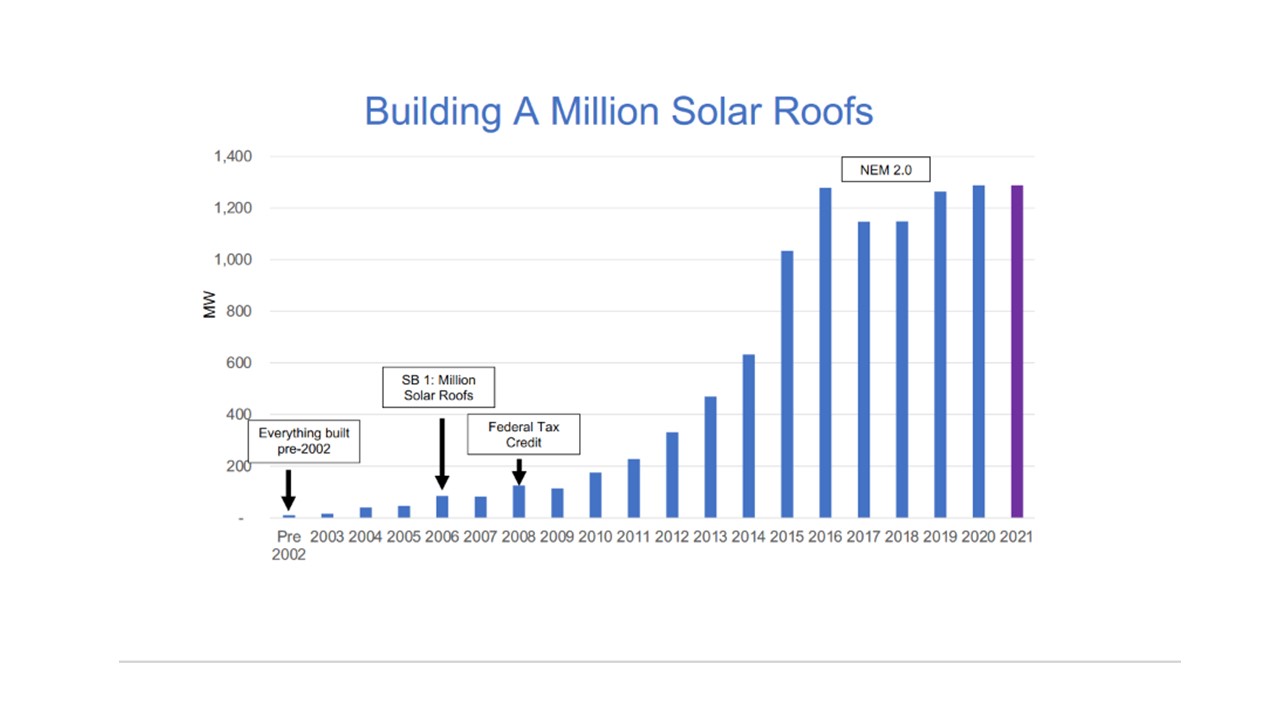 Now the CPUC is revising the amount paid to owners of rooftop solar systems who send their excess energy into the grid–under what is known as net energy metering. If these revisions don’t undermine the growth of distributed solar, advocates will turn up the heat on their key goals of making distributed storage mainstream and achieving one million storage projects.

Batteries when paired with renewable systems can store excess supplies. This reduces emissions from gas-fired power plants and helps balance the grid.

Distributed storage’s growth between 2013 and 2019 looks a lot like the growth curve for solar rooftops a decade earlier.

But distributed energy storage’s prices are not yet falling. The supply constraints for the next year at least will create problems, del Chiaro warned. “Future growth is not mapped out as California doesn’t have long-term programs to ensure storage’s continued growth.”

Advocates must continue to push against the entrenched fossil fuel interests, Browning stressed. He added that the clean energy path forward must be inclusive and ensure grid reliability as the system transforms. In addition to more storage, it must include flexible demand response, as well as behavioral changes.

What role Browning will play, if any, after leaving Vote Solar, he’s not yet saying.