By Elizabeth McCarthyPublished On: November 2, 2021

Pacific Gas & Electric lost $1 billion last quarter. That compares with positive earnings of $167 million for the third quarter of 2020.

The utility dominates its parent company’s ledger. Pacific Gas & Electric Corp. also lost more than $1 billion, or 55 cents a share. That compares to a net profit of $83 million, or 4 cents a share last year. Its liabilities rose steeply to $17.8 billion, compared to $13.6 billion a year earlier.

During a Nov. 1 earnings call, Patti Poppe, PG&E Corporation CEO, tried to put a positive spin on the company’s health, emphasizing its work to mitigate fire danger. The company is facing additional criminal charges, this time for sparking the Zogg Fire in Shasta County last year. It reached a $125 million settlement with the CPUC for last year’s Kincaid Fire. The company estimates $1.15 billion in liability for igniting the massive Dixie Fire this year that spread across five counties, covering an area the size of Rhode Island. Attorneys for Butte, Lassen, Plumas, Shasta, and Tehama counties sued PG&E in the San Francisco Superior Court on Oct. 20 for that fire damage. Poppe insisted the company operated its system reasonably and is not criminally reliable for the Dixie Fire.

She told financial analysts Monday morning that the company’s fire prevention work resulted in fewer fires from utility equipment between late July and mid-October. It also resulted in fewer homes and businesses having to deal with safety shutoffs. Ignitions from utility equipment dropped an estimated 46% over its 25,000 miles of lines in high threat areas, she said, compared to a three-year average. PG&E has added 1,277 weather stations and nearly 500 high-definition cameras and sectionalized 1,175 miles of lines. In addition, this year 1,800 miles of vegetation have been cut back and 125 miles of its system hardened, now totaling 655 miles. 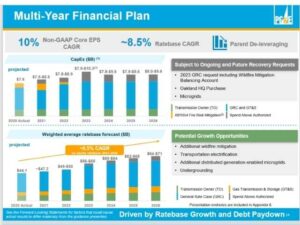 Plans to underground 10,000 miles of overhead power lines in high fire threat areas, announced in late July after the Dixie Fire started, is “an important portion” of its upcoming expenses, Poppe said.

The burying of cable has begun. When a financial analyst asked Poppe about cost reduction possibilities, she said there are “tremendous possibilities” to achieve that. She pointed to an ongoing project estimated to cost between $2.5 and $2.7 million per mile, adding when the company scales up its undergrounding, work costs are expected to be “incrementally lower.’’

In September, it finished burying four miles of line in Santa Rosa. The costs were not revealed. “Construction began in April and it included trenching, inserting conduit, taking down power lines and inserting new ones, as well as removing the equipment from the power poles, according to spokesperson Ari Vanrenen. Part of the town was burned to the ground in the 2017 Tubbs Fire sparked by PG&E equipment.

The company received 25 bids from construction and engineering firms and expects to provide details on its plan to underground 10,000 miles of overhead lines in its 2022 wildfire mitigation plan. It has set up a multi-stakeholder advisory group that includes both environmental and tribal representatives.

Asked about higher utility bills and their effect on ratepayers, Poppe said that a 50% increase in electricity prices results in a 10% increase in customer bills. She added that the company is lowering the hit from spiking gas prices because it has access to various sources of gas supplies and also taps into its stored gas as necessary.

PG&E expects to add 1,740 MW of utility-scale batteries by the end of 2023, with 900 MW of that online by the end of this year. Much of it is being procured under power purchase agreements, and the price confidential, according to Vanrenen.

The company also plans to invest $225 million to install 1,600 charging ports for electric vehicles before 2030. PG&E territory is home to 20% of the EVs in the nation. Chief Financial Officer Chris Foster said that the 1,600 ports “was just scratching the surface” of what is needed to meet growing EV demand.

Wildfire liability mounted for Southern California Edison in the third quarter, as it did for PG&E, leading to significant losses in earnings. Damage from mudslides on burn scars in 2017-2018 also contributed to the negative results.

SCE’s parent company, Edison International, reported a third quarter loss of $341 million, or 90 cents per share. Of that amount, 75 cents was attributed to the utility. That compares to a smaller loss in the same quarter of 2020 of $228 million for Edison International, or 76 cents/share. Nearly all of that, 70 cents per share, was attributable to SCE.

The company continues to pay out for catastrophic fires and mudslides four years ago and much of the red ink came after it raised its estimated total liability for that from $6.2 billion to $7.5 billion. The company added that about 70% of those claims had been settled for $485 million. It also reached a settlement with the California Public Utilities Commission for $550 million over alleged violations of safety regulations that led to the Thomas, Koenigstein, and Woolsey fires in 2017. Of that amount, $110 million is a fine and $65 million is to come from shareholders. The other $375 million is part of an agreement not to charge ratepayers for $375 million in insurance costs.

“While SCE disputes a number of the alleged violations, reaching an agreement puts one additional uncertainty behind us,” Pedro Pizarro, Edison International president and CEO, told financial analysts Nov. 2.

To reassure those on the call, the company chief pointed to SCE’s wildfire mitigation efforts, including installing 1,000 miles of covered conductor this year, bringing the total to 2,500 miles, plus smaller public safety power shutoffs during threatening fire conditions. “Considering physical mitigation measures, operational practices, and the use of PSPS, SCE estimates that it has reduced the probability of losses from catastrophic wildfires by 55 to 65%, relative to pre-2018 levels,” Pizarro said.

SCE, an all-electric utility, is a big proponent of the state’s clean energy mandates and efforts, which include extensive electrification of buildings and vehicles. The company is working on identifying “ways to improve funding, planning, standard setting, and other approaches to successfully achieve the equitable and affordable transition to a clean energy economy,” Pizarro said. He added that efficient electric motors and appliances “will reduce customers’ total costs across all energy commodities by one-third by 2045.”

The utility’s capital expenditures, a closely watched figure, will rise from $5.3 billion this year to about $6.2 billion next year. Of the latter amount, $900 million was added to cover the costs of its 535 MW utility-scale battery project announced in late October. 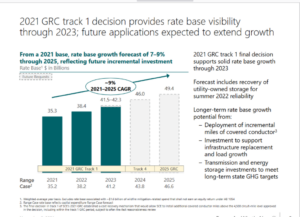 It also expects to secure a total $1.6 billion in ratepayer-backed bonds to cover capital expenses for wildfire. Revenue bonds for $327 million were issued earlier this year following approval by the California Public Utilities Commission last November. The CPUC just approved the issuance of a second bond round for $518 million. SCE plans to seek another issuance for $730 million in ratepayer-backed bonds.

Sempra Energy, the parent company of San Diego Gas & Electric and SoCalGas, will release its third quarter earnings on Nov. 5  Current will report on them next week.