The longstanding question over rooftop solar systems’ costs versus its benefits remained unanswered at the conclusion of testimony given during the California Public Utilities Commission Net Energy Metering  3.0 proceeding.

Whether it is behind-the-meter solar or system infrastructure, there is a potential cost shift, but there is also value, power system consultant Karl Rabago, and former Texas utility commissioner, said. “Regulators are obligated to determine resources’ value, revenue requirements, and who should bear the cost or whether there is another more cost-effective substitute.”

The CPUC proceeding “could ask what the most cost-effective resource is for addressing wildfires and serving transmission constrained load pockets,” he added. “The CPUC is doing the analysis the way it has always been done, which will find a cost shift instead of doing an unbiased comprehensive study of distributed resources’ value in meeting California’s reliability and resilience challenge.”

But imposing costs on customers who don’t have solar installation fails to meet the requirements of the 2013 law, AB 327, which mandated a NEM tariff that is fair to all customers and keeps solar growing, countered Natural Resources Defense Council  Climate and Clean Energy Program Senior Scientist Mohit Chhabra.

The retail NEM rate increases the bills of non-solar owners for the costs of maintaining utility systems while “NEM customers get over-subsidized,” Chhabra said. But according  to Thomas Beach, consultant for the Solar Energy Industries Association and Vote Solar, not factored in are cumulative savings and the societal benefits of reduced natural gas generation, like avoided carbon emissions and reduced air pollution. He estimated behind the meter solar local economic benefits at up to $4.3 billion.

Under today’s NEM, behind-the-meter solar owners are credited with the per-kWh retail rate for the electricity their systems send to their utilities. But that imposes costs on other customers because residential solar customers pay less than utilities’ costs to serve them, the California Public Utility Commission-ordered January 2021 Lookback Study confirmed.

Distributed solar’s recent reduction in the CPUC 2021 avoided cost calculator worry advocates that an NEM 3.0 credit may fail to recognize the full value of the state’s 10.3 GW of rooftop solar.

There is a “fundamental tension” in the AB 327 mandate to set the NEM credit rate so that it both drives solar growth and protects other customers, a CPUC-ordered study of stakeholder NEM proposals concluded. The more the credit benefits solar owners, the more it shifts costs. But that shows new cost-benefit metrics are needed, some stakeholders pointed out. 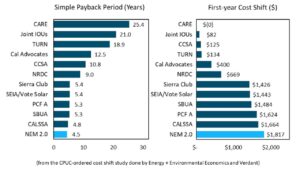 The CPUC’s June cost shift study, central to the NEM proceeding update, used standard regulatory metrics to project solar owner savings and costs imposed on other customers. Projections were made using proposals from investor-owned utilities solar and ratepayer advocates, and other stakeholders for behind-the-meter solar with or without storage.

Tests authorized by the 2001 California Standard Practice Manual were used to establish costs imposed on other customers, and benefits were linked to solar and storage avoided costs in the cost calculator, the study reported.

All the assessed proposals pursuant to the June study lowered the cost shift, but it also showed a higher credit rate to solar owners, reducing their bills and paying back their investment sooner, NRDC’s Chhabra told Current. But the higher credit rates still shift more of utility costs to other customers’ bills because fewer system costs are covered by the reduced solar owners’ bills.

The retail rate credit has driven rapid rooftop solar growth for “disproportionately wealthy” customers at the expense of others who fall into lower income categories and have less access to solar, Chhabra added. “NEM 3.0 must provide reasonable incentives without over-burdening those Californians who do not have solar.”

But the 2021 Avoided Cost Calculator underestimates the value of BTM sola and omits other benefits from the Lookback study and the cost shift analyses, Solar Energy Industries Association Senior Director and Counsel for California Rick Umoff and Vote Solar Senior West Region Director Susannah Churchill told Current. They should be considered in setting an NEM 3.0 credit rate. 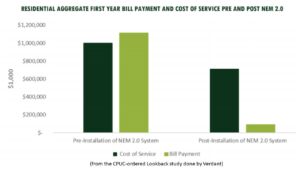 What about the benefits?

California needs a carefully designed NEM tariff that increases solar access to low-income families and drives the pairing of batteries with solar while also reducing cost impacts to other customers, Churchill said.

A SEIA-Vote Solar proposal would gradually reduce the credit to higher income solar owners to reduce cost shifting and impose a high peak-to-off peak time-of-use rate to drive storage adoption, she added. Lower income customers would get “low-cost financing and higher incentives” to increase their access to solar ownership’s benefits.

Because those benefits are not accurately recognized in regulatory assessments, the cost shift is overstated by almost 60%, according to solar consultant Beach.

The Avoided Cost Calculator misses past costs avoided by existing local solar that are likely to continue to avoid costs for two decades, Beach wrote in a NEM 3.0 filing. The assessment of the future cost shift should extend beyond 2030 and recognize how new rate designs and increased use of storage will reduce the burden to other customers.

Rooftop solar provides value for 25 years or longer and is “an alternative to transmission and distribution infrastructure and central station generation put into rates,” Rabago added. Its value should be addressed with a similar “complete cost-benefit analysis.”

Testimony, especially from the IOUs and solar advocates, was widely divided and a compromise is unlikely, stakeholders agreed.

The CPUC’s decision will be based on AB 327, testimony, and long-standing regulatory principles, said former Department of Energy executive and Massachusetts utility commissioner Susan Tierney. “I will be surprised if there is not litigation.”

A proposed decision is not expected until November or December.