SCE Emergency Big Battery Project May Be a Gamechanger

By Herman TrabishPublished On: October 28, 2021

Southern California Edison just announced it is procuring 537.5 MW of battery energy storage to be online mid-summer, a move that could accelerate the transition away from fossil fuels to using clean energy to provide reliability.

This would be “a significant benchmark in our transition to a carbon-free electric system,” Center for Energy Efficiency and Renewable Technologies Executive Director V. John White told Current. “It will add important utility experience with large-scale batteries in the real world under stress conditions.”

Three large lithium-ion battery installations at existing SCE substations totaling 2,150 MWh are scheduled to be online by August 2022. They were bought pursuant to the authority in the California Public Utilities Commission 2020 Emergency Reliability rulemaking (R.20-11-003). They are to provide system and local reliability beyond next year.

The battery project, costing an estimated $1.23 billion to install and operate, will be discharged to meet local or system emergency power shortages, Walsh said. They will be charged during low cost, low load, high solar periods and discharged during high cost “net peaks,” when stored solar can avoid the natural gas generation normally used to meet peak demand after the sun sets.

These installations also will show that batteries at substations can displace “diesel generators and ratepayer costs for burning diesel fuel” that PG&E has initiated, CEERT’s White said. The SCE project’s size, location, and accelerated timeline “show battery storage is becoming a crucial part of the power system and can be more valuable with natural gas prices spiking again.”

In late July, Gov. Gavin Newsom issued an Emergency Proclamation that called on California regulators to expand efforts to protect against increasing threats to reliability. He specifically called for 2 GW of battery energy storage and “streamlining” availability for summer 2021 and next summer.

Stakeholders have urged the CPUC to push California’s other dominant investor-owned utilities, Pacific Gas and Electric and San Diego Gas and Electric, to approach batteries in the way SCE and its contractor Ameresco propose.

The value of solar plus storage

The next step could be recognizing the value of hybrid projects and providing incentives to customers for making these behind-the-meter solar and storage resources available, White added.

Policymakers and regulators should use “policy mechanisms and project viability measures” that give power providers incentives for locating resources where they can be brought online most quickly, the CEC recommended. They should maximize the opportunities with customer-owned resources for “demand response and demand flexibility.” 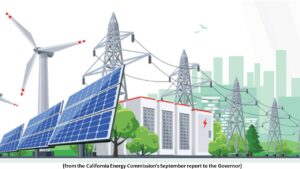 SCE’s project offers hope to clean energy advocates after PG&E delayed its 43.25 MW Oakland Clean Energy Initiative substation-located battery storage projects on April 5. Due to “unexpected technical challenges,” it would not be able to replace its fossil fuel-powered Oakland power plant by 2022 but hopes to use front-of-the-meter batteries to do so in 2023, PG&E said.

Previous proposals by all three IOUs to meet emergency reliability needs do not include clean energy efforts.

SCE’s initial proposal was for just under 70 MW of extra natural gas generation.

PG&E’s initial proposals were for combined heat and power, load reduction, and contracted generation of approximately 125 MW and for 250 MW of imported generation that is likely fossil generation.

A more recent PG&E proposal was for up to 100 MW of CHP from a fossil-fueled industrial facility. Another was for contracts with four third-party-owned, front-of-the-meter lithium-ion battery energy storage projects totaling 270 MW.

A continued role for natural gas

As SCE moves strategically toward decarbonization by 2045, “natural gas will continue to play a role,” Walsh said. But reaching its 2030 and 2045 goals will require a combination of things, like storage, demand response, energy efficiency, renewables “and anything that can help minimize carbon,” including new technologies like green hydrogen.

The new emergency battery storage proposal is “a material increase in reliability for next summer, but on the long-term macro scale, this is relatively small step toward becoming emissions-free by 2045,”  according to Walsh. There also is opportunity for behind-the-meter resources, he added.

The rooftop solar industry has a difficult transition ahead “but its value proposition when paired with storage is similar to the value proposition that Edison sees in these battery projects,” White said. “Flexible resources like customer-owned solar and battery storage will meet the emerging power system need to match load to the growing penetrations of variable generation.”

Before the CPUC approves the SCE proposal, it will need to address stakeholder concerns that its calculation of the emergency need is accurate. Its most recent analysis is not adequate, according to the Union of Concerned Scientists, SDG&E, and consumer advocate The Utility Reform Network. It is only a “snapshot of a potential worst-case scenario,” PG&E added.

IOU arrangements for procurement and implementation of proposals for summer reliability in 2022 and 2023 is in progress, the CPUC October 2021 update reported. A proposed final decision on approval is expected before the end of the year.

SCE requested the commission’s decision on its battery projects “no later than November 4, 2021.”