By Elizabeth McCarthyPublished On: December 14, 2021

The California Public Utilities Commission is urging federal regulators to reject a request by Southern California Edison to recategorize its costs of weed cutting, vegetation cultivation, and other operational and maintenance activities around its large Tehachapi Renewable Transmission project so it may earn a multi-year return.

Allowing the utility to turn expenses for operations and maintenance–unrelated to construction–into capital costs would add $764,000 to ratepayers’ bills this year and next, the CPUC argued in a Dec. 10 protest filed at the Federal Energy Regulatory Commission. The agency also said it would set a dangerous precedent to expand the types of expenses that can earn a rate of return, driving up utility bills that are already high.

When utilities expense their costs, ratepayers pay the tab for the actual amount spent in that year. In contrast, when they are capitalized, utilities are allowed to recoup the costs plus a rate of return well beyond a year.

Former CPUC Commissioner Mike Florio said he is glad the CPUC is “being active” in this and other FERC rate cases because “there is no other consumer representation.” Florio is a senior fellow at Gridworks.

“SCE’s proposal to account for multi-year environmental restoration costs as capital, not expense, is consistent with sound accounting principles and will lead to lower near-term rates for customers,” said Jeff Monford, SCE spokesperson. He declined to answer any specific questions, including how rates could drop overall, saying the utility will explain its position in more detail later.

SCE’s “unilateral determination” to change its accounting to increase its rate base for Tehachapi “inappropriately harms ratepayers and, if allowed, will set a bad precedent for future costs,” CPUC attorneys insisted. They also said that SCE did not inform the commission of its request to earn a return on O&M costs.

According to commission attorneys, SCE plans to expand costs that can earn returns for other projects as well, including adding $1 million in costs for planting, seeding, and site restoration for the El Dorado-Lugo-Mohave and Victorville projects beginning in 2023.

For the last eight years, SCE categorized the weeding, planting, and other environmental remediation work as O&M expenses. 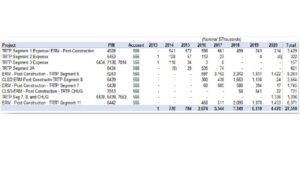 SCE argued it is able to earn a return on work done to comply with a CPUC permit. The CPUC disagreed. “This is an overly broad interpretation which would allow for capitalization of virtually any regular maintenance activity as long as that work kept the project in compliance with its operating licenses,” the commission stated.

The request for expanding capital expenditures came in a 2022 Formula Transmission Rate Update Filing made by SCE in mid-November.