By Elizabeth McCarthyPublished On: November 8, 2021

Like California’s other two investor-owned utilities and parent companies, Sempra Energy’s latest earnings also were in the red, not from wildfire liability but from the huge methane leak at subsidiary SoCalGas’ Aliso Canyon storage field. A $1.13 billion settlement that includes most of the plaintiffs resulted in a loss for Sempra of $651 million, or $2.03 per share. That compares to net income of $351 million, or $1.21/share in the third quarter of 2020.

SoCalGas’ loss from the settlement was $1.15 billion. The storage well blowout in October 2015 lasted five months and sickened residents, forcing thousands around the Porter Ranch community to evacuate. The net after-tax cost to the utility is expected to be about “$895 million, after taking into consideration the remaining insurance receivable and other adjustments,” the company reported Nov. 5.

San Diego Gas & Electric, also a Sempra subsidiary, reported income of $205 million compared to a loss of $24 million for the quarter ending Sept. 30, 2020.

Power plants that run on natural gas usually account for about 39-42% of demand in winter, but that is projected to rise to about 45%, Jeff Martin, Sempra CEO and president, told financial analysts on Friday. “We could see record natural gas use this winter.”

The day before the call with analysts, the CPUC voted to increase storage at Aliso Canyon from 36 billion cubic feet to 41.6 Bcf, due to possible increased winter demand from low hydropower.

Increasing the rate of return

SDG&E’s cost of capital application to be filed in January will seek to increase its double-digit return on equity from 10.02% to $10.55% and lower its cost of debt from 4.59% to 3.84%, according to Martin. The company also will ask the CPUC for a ruling in the first half of next year. 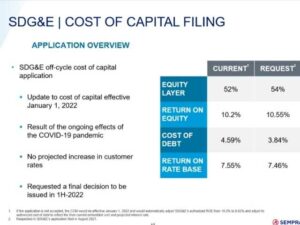 It also is bullish on importing wind energy from Mexico over its cross-border transmission lines.

Sempra owns the 252 MW Ventika wind farm in Mexico, one of the largest complexes in Latin America. Earlier this year, it also took over full ownership of the 155 MW Energía Sierra Juárez wind farm in Baja for $80 million. It interconnects with the Southwest Powerlink at San Diego Gas and Electric’s East County substation, which gives the company a competitive advantage, Martin said. The project is being expanded to add 105 MW and is expected to be online in the first half of next year.

Sempra also is banking on using its California storage facilities and natural gas pipelines to store and transport renewable gas and green hydrogen.

The company will announce its planned storage projects in the next few weeks, Martin said.