By Elizabeth McCarthyPublished On: October 28, 2021

If we do not tackle emissions from refrigerants “it could negate everything we do,” Abhilasha Wadhwa, CPUC Energy Efficiency Branch analyst, said during a joint energy agency hearing on Oct. 28.

The hearing discussed short-, medium- and long-term clean and affordable energy policy focused on building and transportation electrification and integrated resources, and needed research and development funding to advance them.

EPIC’s annual budget of $148 million, which runs to the end of the decade, has supported three kinds of projects. The first is laboratory R&D that can have difficulty finding funding elsewhere. The other two are emerging technologies beyond the lab stage but still under development, and R&D projects that advance clean technology and lower customers’ costs that are near commercialization.

The energy agencies want to make sure the investments result in projects that are clean and don’t drive up ratepayers’ tab or undermine reliability, officials said.

“The future is heavy electrification” of both the building and transportation sectors to attain a decarbonized system by 2045, said California Energy Commission Chair David Hochschild.

Buildings are responsible for half the carbon emissions in the state, if you apply a lifecycle analysis, said the CPUC’s Energy Division Regulatory Analyst Jack Chang. That includes materials and construction as well as building operations. 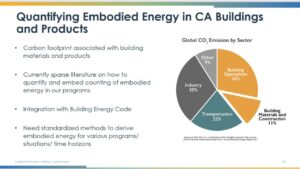 But switching homes from natural gas to electricity is bumping up against grid inadequacies in several places. In the San Joaquin Valley, for example, Pacific Gas & Electric “is holding up fuel switching investments” because the grid can’t handle the added load, CPUC member Martha Guzman Aceves said.

The fuel switching project was awarded $56 million in 2018 from the CPUC and is supposed to move 1,676 homes off fossil fuels, largely to electricity. To date only 86 homes have been switched.

Constrained grid capacity also impacts electric vehicles’ ability to charge back and forth from the grid, Guzman Aceves added.

A separate CPUC proposal includes $50 million in incentives to allow those whose homes burned down to rebuild all-electric residences. The subsidy is one and a half times higher for low-income residences.

To avoid aggravating the situation of residents who live with preventative power shutoffs during periods of high fire danger, homes and communities need to be able to island—be powered independent from the grid, Wadhwa stressed.

Community islanding also includes EVs that are bidirectional—they consume electricity and discharge it to power homes.

The state also has money available to fund new ways for buildings to interact with the grid. For example, new controls and communication can make electric heat water pumps provide thermal storage, and like a battery, supply power beyond the building as needed.

Last year, the CPUC’s Self Generation Incentive Program allocated $446 million for that purpose.