SMUD on the Verge of Net Metering Breakthrough

By Herman TrabishPublished On: September 7, 2021

The Sacramento Municipal Utilities District is expected to approve Sept. 16 a novel solution for crediting customer-owned solar, which solar advocates support. Meanwhile, much of the rest of California continues to fight over net energy metering.

The SMUD board is considering a multi-faceted rate design that reduces the retail compensation to solar owners but adds features to drive the growth of solar plus storage. The proposal by staff includes a critical peak pricing rate that will give customers a very high per-kWh price for supplying generation stored in batteries at critical periods of demand when solar generation is reduced, like after sunset.

It also includes an upfront rebate that will help customers cover the high cost of adding a storage system, and programs to low-income customers for offsite local solar system investments.

“Retail rate NEM transformed the market and brought solar into the mainstream, but it is not good for the industry to argue that there hasn’t been a cost shift at SMUD,” solar advocate Vote Solar Senior Director for Grid Integration and former SMUD board member Ed Smeloff told Current. SMUD’s “new outside the box NEM design couples a reduced rate with incentives for storage to create more value.”

Under SMUD’s current $0.12/kWh retail NEM credit, solar owners may be paid $0.05/kWh to $0.09/kWh more for their electricity than its value to SMUD, according to a disputed Energy and Environmental Economics (E3) Value of Solar study. That now adds up to $45/month for the average non-solar owning residential customer and could cost them $90/month in 2030.

Some solar plus storage proponents have concerns about Sacramento’s net energy metering proposal.

California Solar and Storage Association Policy Associate Benjamin Davis said it is an improvement over SMUD’s March 2019 proposal, including because it encourages storage. But, it could contract the overall solar market.

The issue is that the Value of Solar study calculated but did not include the societal value of solar energy, Davis said. That leads to a proposed credit for exported solar of $0.074/kWh, which makes the cash purchase payback period “too long to attract many customers” and results in solar customers’ overall cost of electricity going up instead of down.

Because California’s power system operator and local utilities curtail excess solar flowing into the grid during daylight hours, the future is pairing it with storage, both Davis and Smeloff agreed. The question is whether SMUD’s plan is the best way to move to that future.

SMUD’s plan is a breakthrough multi-component design. This concept was launched first by South Carolina solar and clean energy advocates and Duke Energy in 2020. That design brought together time varying and critical peak pricing and incentives for participating in Duke’s demand response programs. It was endorsed by local Vote Solar and Sunrun representatives.

“We need to breakdown the artificial silos that have existed between different types of technologies like energy efficiency and distributed generation,” Duke Energy Vice President, Rate Design and Strategic Solutions Lon Huber told Current. A “technology agnostic rate design” maximizes their value to the grid by more accurately reflecting “dynamic system needs while also being customer and industry friendly.”

Along with the credit reduction to $0.074/kWh, SMUD’s staff successor NEM retail rate has three other key elements.

First, it offers an optional residential Critical Peal Pricing credit for up to 50 hours per summer when supply is most needed. Participating customers will also be eligible for as-yet unspecified summer off-peak and mid-peak hour discounts.

The CPP rate will be $0.50/kWh, according to SMUD Energy Delivery and Operations Director Eric Poff. It is “a price signal meant for storage device customers to create value by dispatching their storage devices during these events and for smart thermostat customers for minimizing usage.”

Third, SMUD will offer customers without access to solar, like those in multifamily dwellings or with inadequate financial resources, a virtual net metering program. That will allow them to purchase credits from a centrally located solar system to offset their electricity usage with lower-cost solar under SMUD’s ratepayer assistance programs.

Feedback from solar advocates shows there is demand for the virtual net metering program. To assure it is fully understandable to customers, details, including the credit rate, are still “under design,” Poff said. 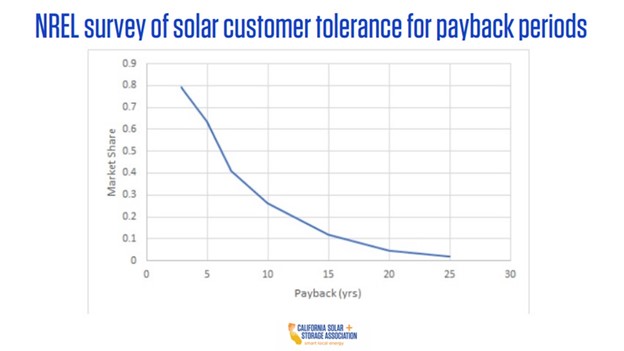 The cost of omitting societal benefits

By omitting societal benefits like emission reductions from its final cost-benefit calculation for SMUD customers’ solar, E3 overlooked between $0.02/kWh and $0.16/kWh in value, CalSSA’s Davis said. Higher credit for exported solar generation that considered those societal values could reduce the payback period and improve the negative cash flow that has impeded solar growth in other markets, he said.

Lengthening the time before it goes into effect beyond SMUD’s planned January 2022 start date for the new credit rate would at least create a glide path for market adjustment and could minimize impacts, he added.

Davis proposed adding a solar time-of-use rate for all solar owners to ease the impacts of the reduced credit while increasing system support. It could protect some new solar sales if the credit at peak periods was a few cents lower than the retail charge, but higher than $0.074/kW, he said.

Finally, SMUD could strengthen benefits for customers in the Virtual Power Plant program to address the longer payback period and negative cash flow issues because that program will be valuable to SMUD in helping meet reliability needs like shaving demand peaks, Davis said. “The important thing is that SMUD’s new policy does not contract the market because experience in other California markets suggest the current plan could reduce new solar sales 50% or more.”

There is so far no indication of whether SMUD’s board or staff is considering CalSSA’s proposals.

The proposal is expected to be approved by the Board on Sept. 16 for implementation Jan. 1, 2022, Poff said. Staff recommended existing solar owners be allowed to stay on the current retail rate through 2030.