By Herman TrabishPublished On: October 12, 2021

An innovative proposal from Vote Solar and other solar advocates would demonstrate that customer-sited solar and storage can provide reliability and resiliency.  The Joint Solar Reliability Parties microgrid docket filing with the California Public Utilities Commission proposes rebates for adding storage to solar and committing part of the stored generation to the system during daily peak demand periods, similar to what was adopted by the Sacramento Municipal Utilities District.

Based on a proposal being implemented by Hawaiian Electric, the plan could provide 1.5 GW of peak demand support to the California system, Vote Solar Senior Director for Grid Integration Ed Smeloff said.

The proposal was made after an Aug. 17 CPUC ruling expedited its Track 4 phase 1 microgrid proceeding, requesting proposals to increase 2022 resiliency and reliability. It was in response  to Gov. Gavin Newsom’s July 30 emergency directed regulators to accelerate strategies preventing blackouts.

While the primary venue to address reliability is the docket established to address that issue, “proposals will be considered in the microgrid proceeding if they address the Governor’s reliability goal,” Commissioner Genevieve Shiroma wrote. 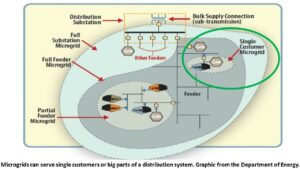 Generation sources that can isolate from the system, like microgrids, provide local resilience after a blackout, but without storage capabilities they are usually too limited in scale to effectively serve system reliability.

Reliability is “normal, routine operation” of the power system when not disrupted by outages or capacity shortfalls,” a new San Diego Gas and Electric microgrid proceeding filing said. In other words, it’s keeping the lights on. Resiliency is adapting to “reliability events” locally to return service to individuals or communities, that is, getting the lights back on.

SB 1339 instructs the commission to avoid any potential “cost-shift,” which could be a problem if a cost like rebates is greater than the program’s benefit and allocated across the rate base, the IOUs said.

There also is a “risk of double compensation” if programs like the one from the Solar Parties provide incentives for resources already eligible for remuneration from another program.

Even if there is no cost-shift or double compensation, a review of a proposal’s cost-effectiveness and potential for “unintended negative consequences” is needed, the IOUs said. Thus, implementation of proposals like the one from the Solar Parties may not be feasible for 2022 emergencies, they added.

PG&E’s filing proposed further study of use cases for temporary generation as microgrids for resilience or when reliability is threatened.

SDG&E requested approval for two 10 MW microgrids for 2022 and proposed two more for 2024, but microgrids are only “one tool” to address resiliency, it said. And they are only “appropriate for a reliability problem” in “exceptional circumstances.”

The battery would make the solar customer resilient to outages. Discharging the battery to meet daily peaks would make the system more reliable against blackouts without using emissions-creating natural gas generation, Smeloff said.

There would be no double compensation. Solar customers are entitled to compensation through net metering. Reliability added from a battery with performance requirements is a “new and incremental service” that would be cost-effective by “lowering market clearing prices” during peak demand periods, Smeloff said.

Rebates would not go to existing solar-plus-storage customers, which means the program would not provide compensation for reliability that customers would have received anyway, Smeloff added. But the Solar Parties agree with SCE that deployment and interconnection of solar-plus-storage projects, whether for SGIP or for their rebate program, should be expedited, Smeloff said.

The upfront cash rebates would come from IOUs, and the rebates would be higher for more generation committed during the daily 4pm to 9pm peak demand periods, according to the Solar Parties’ filing. The program could also incorporate features of California’s successful Self Generation Incentive Program, like higher rebates for lower-income and medically vulnerable customers, it added.

A filing from the Microgrid Resources Coalition, a consortium of microgrid advocates, agreed that the Solar Parties’ proposal to drive the addition of batteries with distributed solar installations “would have great benefits.”

The microgrid proceeding was initiated in 2019 to implement mandates in 2018’s Senate Bill 1339, which directed California’s energy agencies to develop and deploy microgrids.

In Track 1 of the proceeding, the only microgrid deployment was PG&E’s temporary diesel-powered mobile generators. In Track 2, the CPUC revised rules to allow the three IOUs to develop and deploy a limited number of microgrids for local governments. No new microgrids were deployed by Track 3.

The proceeding’s priorities were changed by the Governor’s July 30 declaration. After the accelerated phase 1 of Track 4 was announced, opening comments for the non-expedited phase 2 were delayed until November 1.

Customers only qualify for the rebate if they commit to the required dispatch, Smeloff pointed out. Participation will be driven by the rebate amount, and the Hawaii program experience will help set that cost-effectively, he added.

As of September, Hawaiian Electric had “over 300 applications” to the program that was just opened in June, “with installation and verification commencing in October,” Hawaiian Electric Director for Customer Energy Resources, Operations Yoh Kawanami said.

A proposed decision is due by the end of October.