By Elizabeth McCarthyPublished On: October 19, 2021

Hundreds of articles and essays have addressed the controversy over how much residential solar rooftop owners should receive for the excess power they send to the grid, with utilities long claiming this burdens others who do not have and cannot afford solar. The issue of compensation is viewed as essential to the expansion of solar on residential roofs. But last week, the California Energy Commission highlighted something else that’s advanced solar in the state: the New Solar Home Partnership. Its incentives helped drive the installation of 233 MW of panels on homes, covering about half the newly built residences in California, with some at low income and rental properties. The New Solar Partnership was part of a decade-long $2 billion solar subsidy effort in California.

Since 2007, this program for new homes, created by the legislature, has provided $241 million to developers, builders and homeowners to drive down the cost of distributed PV and reduce emissions and consumption of energy from the grid, according to the CEC. The program could reach up to 296 MW by the end of the year when it officially closes.

Over the last 20 years, the cost of solar panels has dropped from $10 per watt to $0.30 per watt, California Energy Commission Chair David Hochschild said during an Oct 13 presentation of the new homes partnership. He gave part of the credit to the solar homes program, which is managed by his agency, and other state subsidies. Clean energy mandates alone “would not work without the subsidies,” he said.

The New Solar Homes Partnership was part of the massive California Solar Initiative (CSI) signed into law by former Gov. Arnold Schwarzenegger. Between 2007-2016, it provided $2.2 billion in ratepayer subsidies for 1,940 MW solar installations on existing buildings and new homes, and some low-income properties in California.

The solar homes partnership was allocated up to $400 million from the ratepayer-funded Public Goods Charge. Subsidies were stepped down each time a certain number of megawatts were installed.

The partnership “is one component” of an effort that featured some 11,000 MW of new solar capacity as of the end of 2020, Geoffrey Dodson, CEC New Solar Home Partnership manager, told Current.

How much credit do subsidies deserve?

There is widespread agreement that the subsidies helped propel the new home solar market, but little agreement over how much because several factors were pushing in the same direction.

Rooftop solar involves the cost of the panels as well as the costs of installations, including labor costs to put them on roofs, sometimes referred to as the soft costs.

Solar panel hardware costs have been decreasing for a number of reasons, including policy requirements and manufacturing improvements, Mohit Chhabra, NRDC senior scientist, told Current. Although it is hard to know the contributions made by the various factors – incentives, competition between firms, or more efficient sales, “It is safe to say that CSI helped build an infrastructure of rooftop solar installers in California,” and the market is “in a healthier place.”

The new home solar subsidy was likely “critical at the outset in 2007 to get the installation industry off the ground,” noted Richard McCann, a partner of the consultant group MCubed.

According to a GTM Nov. 2014 article, CSI was so successful in its first few years, 72% of “all residential solar projects in the state were completed without any state incentives in the second quarter of  2014.”

Following CSI’s success, the focus on continuing the growth in solar shifted away from subsidies. The CEC was required by legislation to stop taking reservations for new homes as of June 2018. In addition, the 2019 CEC Building Energy Efficiency Standards required almost all low-rise residential housing to have built-in solar, obviating the need for any subsidy for homes built under the new standard, the CEC’s Dodson said.

The program won’t achieve its goal of 360 MW solar capacity by Dec. 31 because it largely has been superseded by CEC regulations.

That means $112 million in programs funds remain unspent and are being held by the investor-owned utilities. Pacific Gas & Electric, San Diego Gas & Electric, and Southern California Edison are supposed to return the funds to ratepayers.

Asked if net energy metering uncertainties impacted the program, the CEC’s Dodson deflected, saying that the program is handled by the California Public Utilities Commission. He added that “a funding structure that decreases payment over time appropriately addresses the market trajectory of increased demand and decreased costs over time.”

Batteries are next up for increased subsidies. 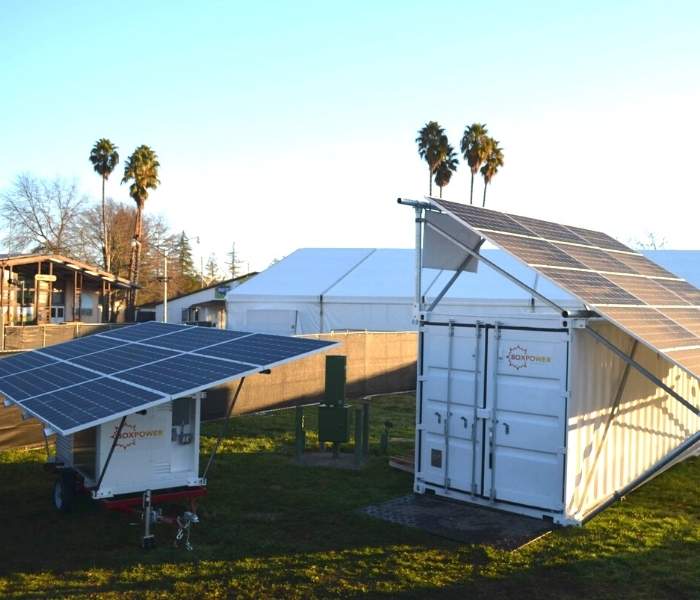 “Rooftop solar is a great gateway drug for the next thing,” Chair Hochschild said referring to the need to provide more incentives for pricey storage projects so that they can piggyback on solar.

He said only about 20% of the homes with solar systems have storage, naming Hawaii as an example to follow. Partly because it’s an island dependent on fossil fuel imports and partly thanks to state subsidies, there is widespread adoption of solar and storage there.

“The main barriers that customers face in applying storage to increase their personal resilience is the substantial first cost of installation and a knowledge gap regarding the advantages of storage.” He pointed out that these barriers are much larger for lower-income and vulnerable Californians.

The CPUC’s Self Generation Incentive Program has been providing subsidies to storage since 2009. Of late, it has set aside $62 million annually for storage projects, with 15% for home batteries.

East Bay Clean Energy teamed up with SunRun last July on a program to increase home battery installations by 5 MW by the end of 2023. In exchange for $1,000, residents agree to let Sunrun tap into the battery to help power the grid. To date, EBCE has signed up almost 400 homes and is making progress on a number of multi-family affordable housing units that will provide discounted energy and resilience to low-income residents, said JP Ross, vice president of local development.

Also, last summer, Marin Clean Energy, the state’s first community energy organization, began offering monthly bill credits of $10-$20 per month depending on the size of the storage. That is on top of $1,500 to $4,500 in rebates for installations. To date, five systems totaling 89.2kWh have been installed, with another 1,365 kWh at 83 homes in the works, said MCE spokesperson Jenna Tenney.  This week, the community utility began offering income-based 10-year loans at between 0% and 5.5% interest to help with the upfront costs of home battery systems.

Last month, the Sacramento Municipal Utilities District board approved a reworked net energy metering scheme that reduces the retail compensation to solar owners but adds features to drive the growth of solar plus storage. It includes a critical peak pricing rate that will give customers a very high per-kWh price for supplying generation stored in batteries at critical periods of demand when solar generation is reduced, like after sunset.

The CEC has been funding projects that seek to expand the types of batteries on the market for years. Over the last decade, it invested in more than 50 energy storage research projects. In 2020, it awarded over $53 million in new energy-storage research grants to 22 recipients, Mike Gravely, CEC researcher program manager, said in an email. “This represents the largest investment in emerging energy-storage technology advancements in the history of the CEC.”